Here’s the dough on these delicious cinnamon rolls — they’re free from refined sugar, are completely plant based and are packed with protein.

Make a whole batch for the breakfast you’ve been missing, or serve to your friends for instant popularity/vegan converts. Don’t be put off by the baking, as these cinnamon rolls are super simple and the fruity filling is to die for.

This recipe uses our Flaxseed Powder which is an excellent source of plant-based omega-3 fatty acids, so not only do these taste great but they have nutritional benefits too!

Drizzle the buns in a dairy-free cream cheese icing for that final classic cinnamon roll finish. 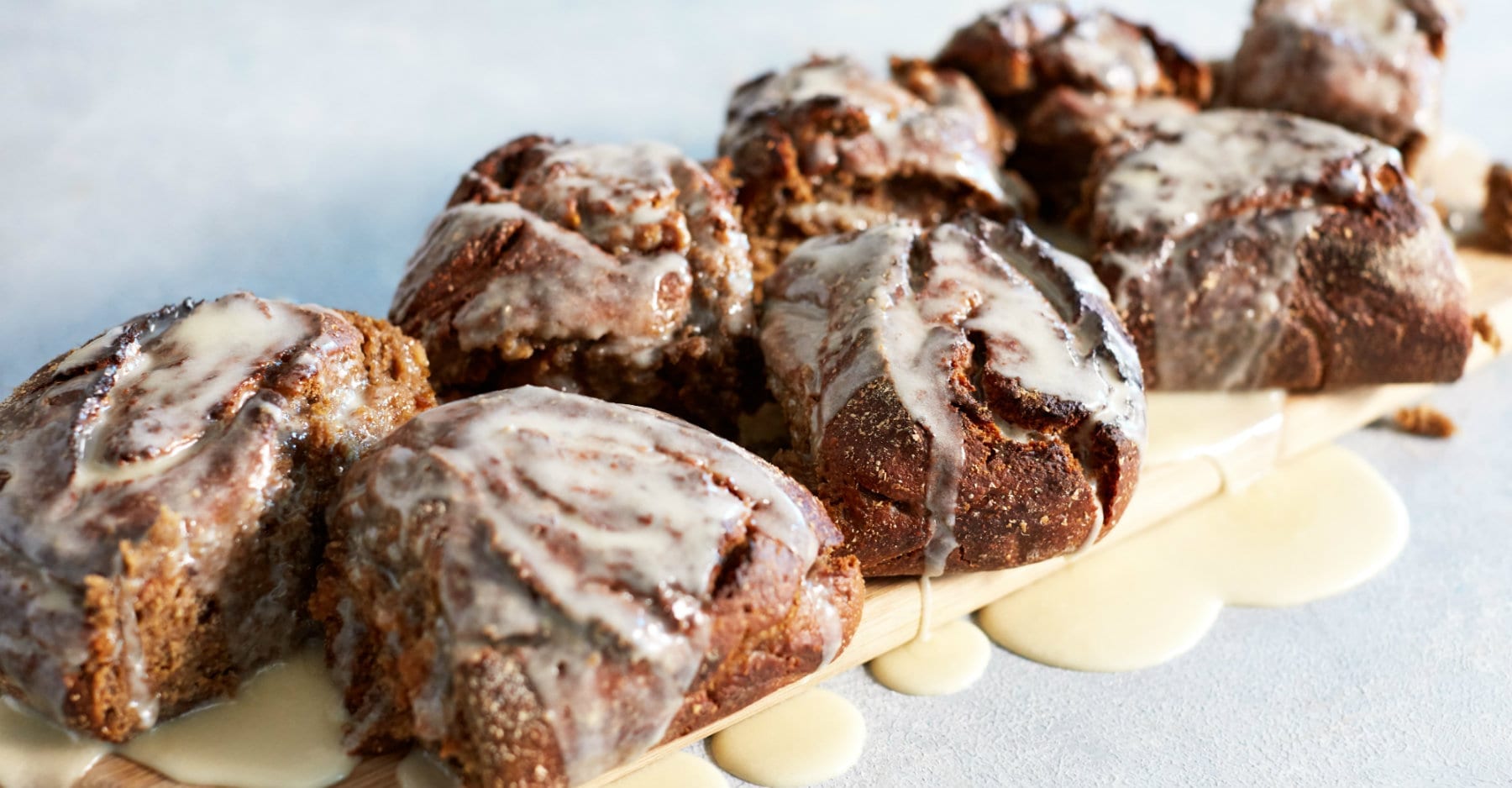 1. Microwave the almond milk until it’s just warm. Then, mix through the yeast and maple syrup and leave to stand for 5 minutes.

2. Make your flaxseed egg to bind the mixture together — add 3 tbsp. of water to 1 tbsp. of flaxseed and leave it to soak for a few minutes.

3. Next, mix together the flour, vegan protein, melted coconut oil and cinnamon in a large mixing bowl. Then, slowly mix in the yeast mixture a bit at a time.

4. Sprinkle the work surface with flour, place the dough on it and kneed for 20 seconds or so.

5. Put the dough back into the bowl and cover with a tea towel to prove for about an hour until it has doubled in size.

6. While the dough proves, make the filling by blending the bananas, nuts and dates together until smooth.

7. When the dough is ready, preheat the oven to 180°C and roll out the dough on a floured surface into a large rectangle that’s around 8”x15”.

8. Cover the rolled out dough with the fruit filling before rolling from the shortest edge to form one long sausage.

9. Slice the sausage into 8-10 even slices, then place the rolls into a greased 8”x8” baking dish.

10. Cover it with a tea towel and leave it to prove for around 20 minutes.

11. Put in the oven to bake for 25-30 minutes, or until it’s golden brown, then leave to cool while you prepare the topping.

12. For the topping, combine the vegan cream cheese and almond milk. You can add some syrup here if you prefer it sweeter. Brush the topping over the top of the cinnamon rolls and tuck in.

Evangeline is a Veganuary convert and newbie vegan with a degree in English and French from the University of Nottingham. Having recently ditched the meat and dairy, she really enjoys the new flavours and cooking techniques she’s encountered on a plant-based diet. She’s been shocked by the millions of ways you can use tofu, however still hasn’t found a decent cheese substitute!

When she’s not in the office or eating, Evangeline usually out running or sailing. As a qualified RYA Dinghy Instructor and a marathon runner, she knows the importance of providing your body with the right nutrients for endurance sports as well as a busy lifestyle.

What Are Ecosystems & Why Are They Important?

How Can Hormones Impact Exercise?