Diets and lifestyles can have a huge impact on our relationships with family, friends and romantic partners.

Plant-based diets have risen in popularity recently, but they’re still more fringe than mainstream. This can make navigating diet changes when in a relationship and finding new partners difficult for people who avoid animal products.

Naturally, this is expected due to there being significantly fewer vegans in general, let alone in the dating pool. But how much do differing diets and lifestyles affect our relationships and dating lives?

We surveyed 2,000 UK adults of different diets (vegan, vegetarian, flexitarian, pescatarian and meat-eaters) to find out…

Diet can be a bone of contention for any couple — especially those following different lifestyles. We found that 7% of Brits have argued with a partner about diet, with vegans having done so more than any other group (17.7%), and 16.1% doing it on a first date.

Pescatarians were the next biggest group to report diet-related disagreements (14.1%), while meat-eaters were the least likely to argue over diet (6.1%). 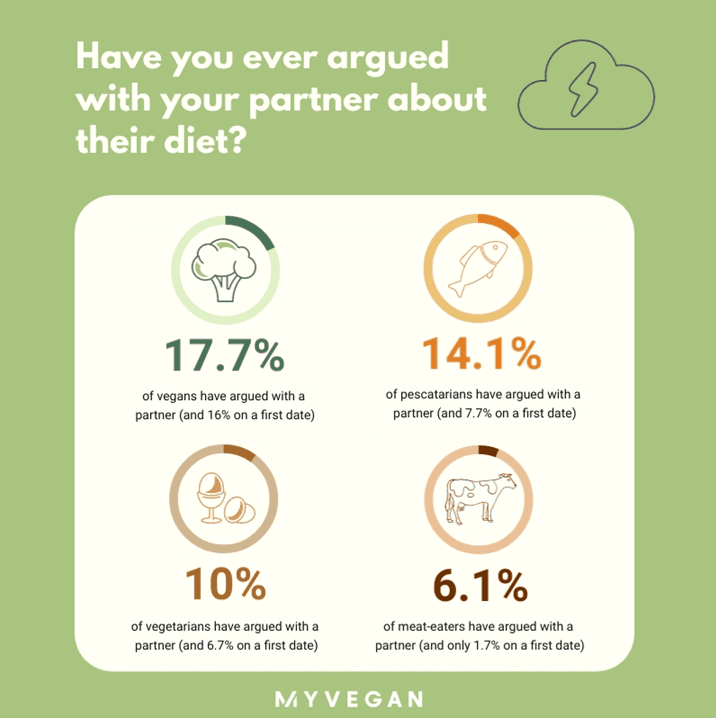 Sometimes, no matter how hard we may try to smooth out our differences, things don’t always work out. Differences in diet are a deal-breaker for vegetarians it seems, with 10% claiming to have broken up with a partner as a result. This was followed by 6.5% of vegans, and meat-eaters were at the opposite end of the scale (1.3%). 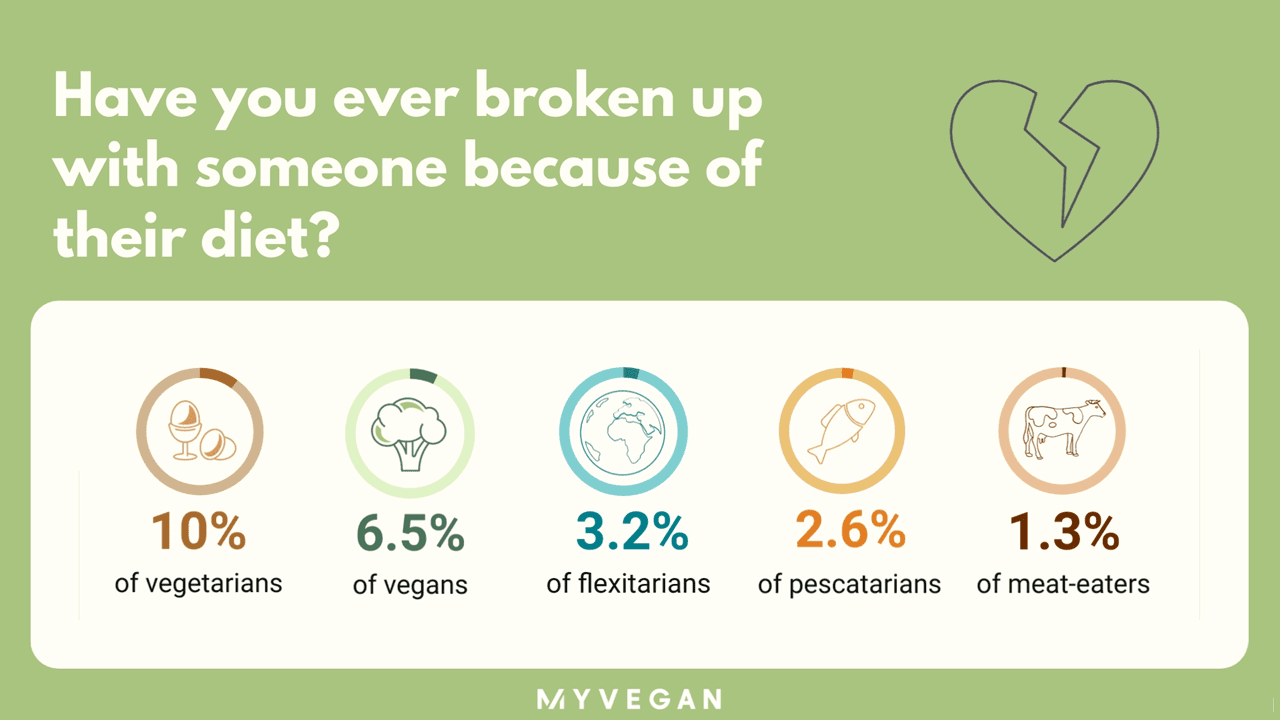 Vegetarians most open to dating someone with a different diet; vegans least likely

However, it seems vegetarians are also the most open to dating someone with a different diet, with 76.7% claiming so. Meat-eaters were more reluctant, with only 62.6% being open to the idea. But this didn’t beat the vegan group, of whom only 61.3% said they’d be happy to explore a mixed-diet relationship.

Over half of vegans said they’d be less attracted to somebody because of their diet (52.6%), which makes sense given the strong ethical and moral values that come with the lifestyle. Vegetarians were the next most likely to have diet affect their attraction levels (34.7%), presumably due to similar reasons. Meat-eaters were the most laid-back in this area, with only 14.9% letting diet influence their dating choices. 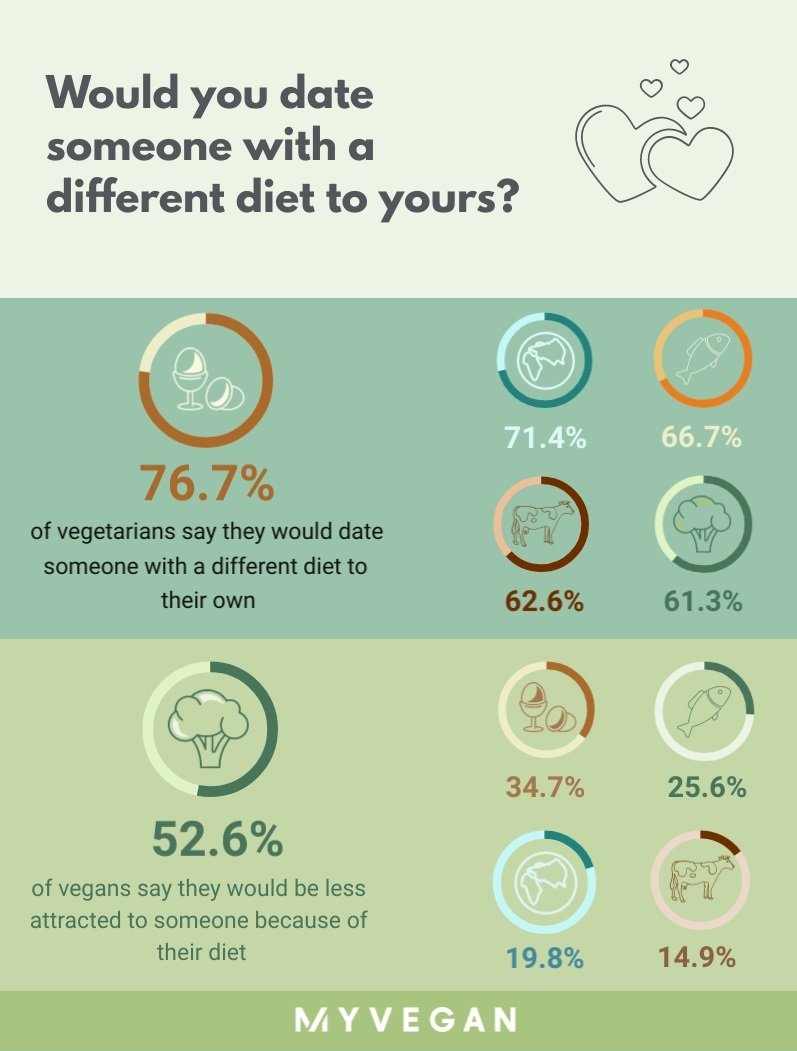 Contrary to popular belief, vegans aren’t the biggest culprits for trying to instigate diet changes in their partners. Pescatarians are actually the most likely to have tried to persuade their partner to change their diet (19.2%), closely followed by vegans (17.7%). Meat eaters are least likely, with 8.3%.

14.7% of vegetarians and 14.5% of vegans admitted to having changed their diet for a partner, while only 6.1% of meat eaters and 5.1% of pescatarians have.

When it comes to openness to changing one’s diet, just over a quarter of Brits (25.8%) would be open to making the switch, with 44.9% giving a staunch “no” to the idea. 40.3% of vegans said they would change their diet for their partner, followed by 40% for vegetarians. By contrast only 22.5% of meat eaters were open to changing their diet, suggesting that those on plant-based diets are perhaps more open and flexible to change generally. 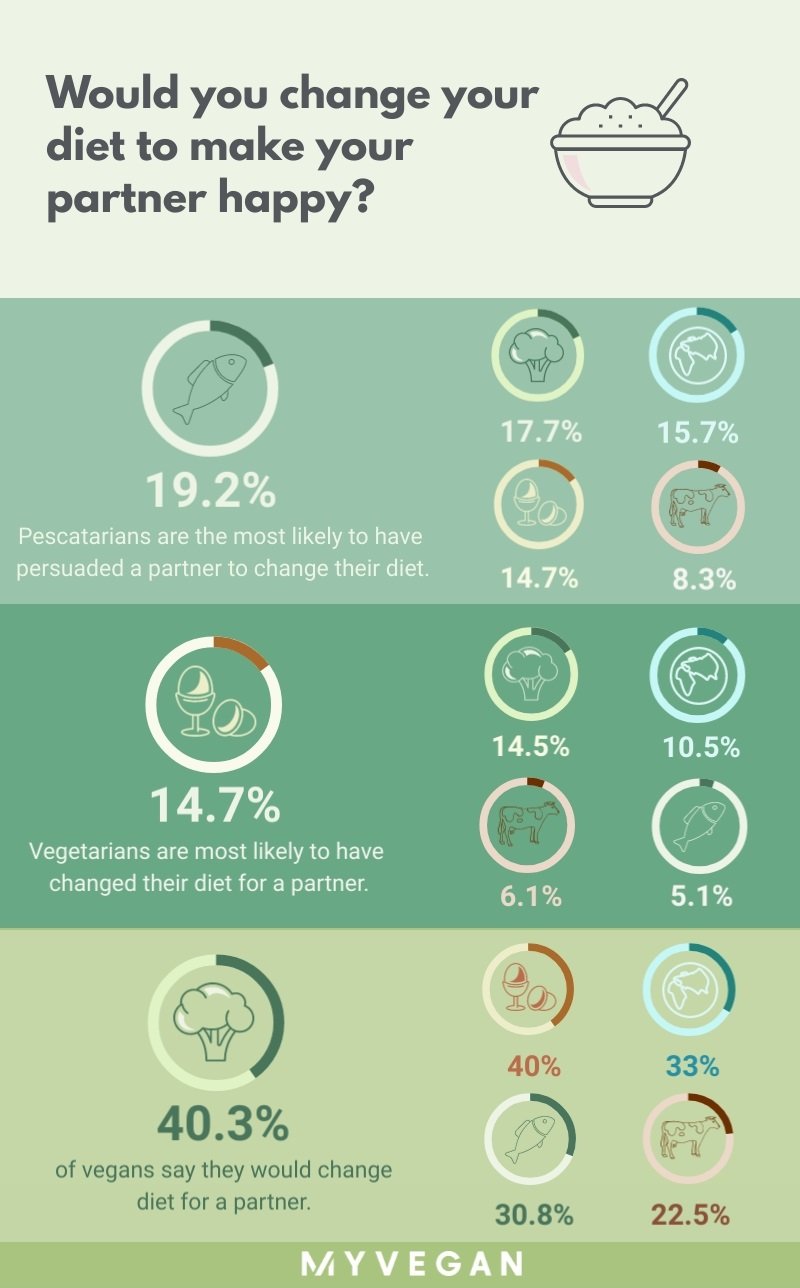 We also looked at what qualities and features people of different diets find desirable in a potential partner. For the average Brit, diet is not of great importance, with just 26.6% saying it is important. Meanwhile, 91.6% said that a sense of humour is most important.

Vegans and vegetarians had slightly different priorities, with 61.3% of each group saying diet is important in a potential partner, compared to 26.6% for the UK average and just 19.7% of meat eaters.

Vegans and vegetarians also seem to be the most politically minded, with 75.8% and 59.3% respectively saying political views are important, placing the issue ahead of career and pop culture. The UK average on this topic is 41.8% (and 35.8% for meat eaters).

Whatever diet or lifestyle you follow, tensions can rise from having a different diet to your partner. The good news is that these tensions can often be diffused through clear communication and a little patience.

Explaining clearly to your partner (or date) why a certain diet or lifestyle is important to you will help them to understand your motives and may even get them interested in trying it themselves.

Avoid negative or judgemental comments about another’s food choices and instead lead by example. Whip up some delicious plant-based recipes, treat them to some yummy high-protein vegan snacks and invite them to share your food. Be open to any questions they may have and direct them gently to any further resources if they’re interested. At the very least, they’ll develop a deep respect for your choices, but who knows … you just might inspire them to make a positive change!

We surveyed 2,000 UK-based adults to find out their dating and relationship experiences and preferences. Questions were multiple choice and covered experiences such as arguing or breaking up over diet; persuading partner to change their diet and changing their own diet because of a partner. We also asked participants to rank various traits that were most important to them in a partner.

Results were split by diet, gender and age.

Which Vegan Foods Are High in Healthy Fats?

6 Ways To Use Vegan Protein Blend

Our Commitment to Eliminating Waste

Getting to Know Johnny Morillo | Meet the Ambassadors