Whether you eat a plant-based, flexitarian, pescatarian or omnivorous diet, there are many ways to grab your groceries to fit around your busy lifestyle. But which dietary preferences shop most sustainably, and which habits will help you save money on your grocery bill?

To find out, we’ve taken a deep dive into the grocery shopping habits of Brits, looking at where they buy their groceries from, how much they spend, what motivates their buying choices and what we’re doing to save money on food.

Here’s what we found …

Where does the UK buy their groceries? 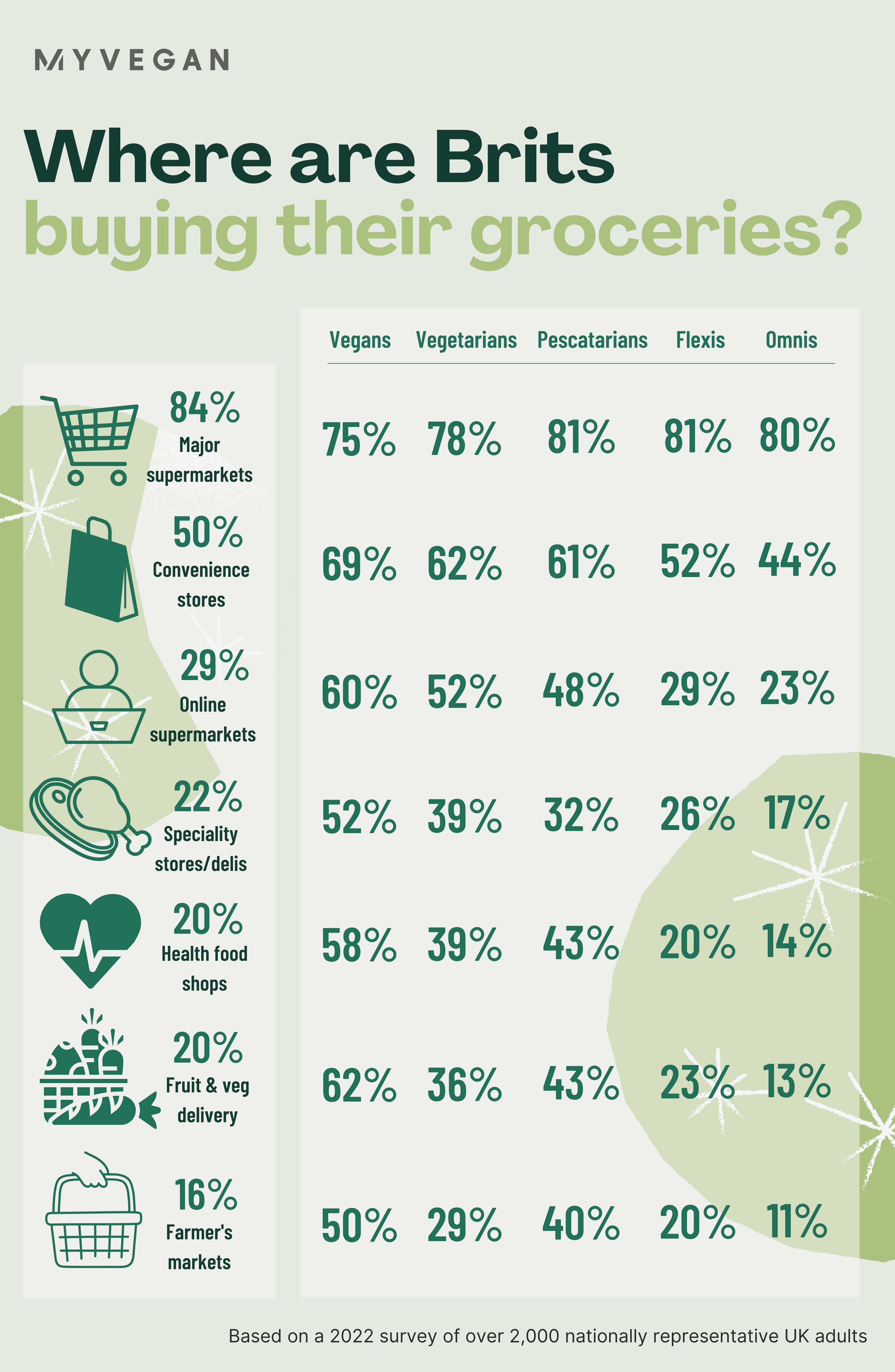 Unsurprisingly, major supermarkets are the most common place to shop (84%), followed by mini-marts or convenience stores such as Tesco Express or Co-Op (50%). Meanwhile, 29% shop via online supermarkets.

More niche places to pick up groceries include speciality shops/delis (22%), health food shops (20%), and farmers markets (16%), with 20% also getting a fruit and veg delivery each week.

Vegan diets seem to coincide with more local or health-focused shopping choices, with over half (58%) of vegans shopping at health food shops, 52% shopping at speciality shops/delis and 50% choosing to shop at farmers markets at least once a week.

While major supermarkets are still the main place for vegans to buy their groceries, a smaller percentage of vegans visit them than followers of other diets. Pescatarians are nearly as eco and health-conscious, with 43% shopping at health food shops and 40% choosing to visit farmers markets.

Vegans and vegetarians are also the most likely to shop with convenience in mind, with 69% and 62% respectively shopping at convenience shops, and 60% and 52% shopping at online supermarkets. Vegans and pescatarians are the most likely to have a weekly fruit and veg delivery (62% for vegans and 43% for pescatarians), which possibly ties into their concerns around the environment and their preference for locally sourced or organic food.

How much do Brits spend on groceries?

When looking at how much Brits spend on groceries each month, the average household was found to spend £222 — £51.23 per week.

Vegans most likely to shop with eco-credentials in mind

Even before the cost-of-living increase, 89% of the UK public already had price topmost in mind when choosing where to shop for groceries. This is followed by quality of items, which 88% of Brits rate as very or somewhat influential, and location, which 84% agree is also important. Variety and availability of products is also important to Brits, as is the option to buy locally, with two thirds (66%) rating them both as very or somewhat influential.

Sustainability factors such as brand ethics and availability of refillable options were lower down on the list, though still important, with 53% and 52% of Brits respectively claiming them to be influential. Whether a shop sells organic food is less of a concern, though, with just 36% saying this was influential.

Vegans seem to be the most eco-conscious group when choosing where to shop. Brand ethics and responsibility and sustainable packaging options rank joint second after location (which 87% ranked as most important), with 85% of vegans agreeing these factors are very or somewhat influential. These factors are just as important as price and good variety/availability of products, which shows the lengths vegans will go to ensure their weekly shop is as ethical as possible.

Vegans are also the most likely to shop places where they can find organic produce, with 67% rating this as important compared with just 36% of the nation overall.

When it comes to what we put in our trolleys, quality of items is the most important factor Brits look at, with 90% agreeing this is very or somewhat influential. This is followed by price (89%), how healthy an item is (71%), and whether a product is locally produced (60%). Other factors, such as the product’s packaging, brand ethics, whether it’s refillable and whether it’s organic, are less important.

Vegans again seem the most eco-conscious in this area, with brand ethics and social responsibility being the top factor that influences their choice of purchases (92%), followed by whether a product has plastic-free, recyclable or compostable packaging (85%). 81% say that price and quality are equally important, while 79% say health.

Pescatarians and flexitarians seem to be the next most eco-conscious group, with 70% of pescatarians ranking packaging of a product as very or somewhat influential, along with 73% of flexitarians.

Vegetarians seem to be the most health-focused when it comes to their choice of grocery items, with 83% ranking health credentials as very or somewhat influential.

What impact has the cost-of-living had on our grocery buying habits?

Since the sharp increase in the cost-of-living, almost a fifth (19%) of Brits say they have incorporated more plant-based meals and/or meat substitutes into their diet, with 4% adapting a fully vegan or veggie lifestyle and 6% adapting a pescatarian lifestyle.

Almost half (49%) of the population say they have found it noticeably more difficult to shop sustainably for groceries, with flexitarians finding it most difficult of all (58%), followed by vegans (54%), omnivores (49%) and vegetarians and pescatarians (43%). 17% say that shopping sustainably was not a concern before, so had not noticed any difference.

When it comes to choosing where to shop, it’s obvious the cost-of-living squeeze is directing our buying choices more than ever. 90% of Brits name price as the most important factor (compared to 89% before the cost-of-living increase), while quality is now seen as less important (85% vs 88% before). Location is also less important, suggesting people are willing to travel further in order to get the best deal on price (82% vs 84%).

Other factors now deemed less important are variety and availability of products (60% vs 66%), the option to buy products with sustainable packaging (54% vs 58%), brand ethics and social responsibility (50% vs 53%) and whether there are refillable product options available (47% vs 52%).

When choosing grocery items, quality now takes a backseat to price, with 90% of consumers saying price is most influential compared with 86% for quality. Health credentials are also seen as influential by 68% of people, compared with 71% before cost-of-living increases, while eco-factors such as sustainable packaging and brand ethics have also fallen down the scale of importance with 53% and 49% of people rating them as important respectively, down respectively from 58% and 55%.

How is the UK saving money on groceries?

Since the rise in the cost-of-living, 51% of Brits say they have switched to cheaper brands and items, while 46% say they look for discounts and deals wherever possible. 42% have restricted themselves to buying fewer items, 40% plan their meals to avoid food waste and 26% buy food in bulk to cut down on costs.

Almost a quarter (24%) have switched supermarkets in a bid to get their groceries cheaper, while 11% have made an effort to buy refillable products. Another 11% say they try to shop from local or independent shops and markets. Only 12% of respondents said they haven’t done anything differently.

Vegans seem to be making the biggest efforts to cut down on food costs, with just 2% claiming to have not changed any habits. Omnivores seem to be the least affected group, with 17%.

Planning meals to cut down on food waste seems to be the most popular eco-conscious money-saving habit, with consumers of all dietary preferences making it a priority. This is followed by buying items in bulk, which was also high on everyone’s list.

It’s clear the UK’s grocery buying habits are being significantly affected by the rise in living costs, leading to more choices based around price and convenience rather than sustainability.

The good news is that there are ways to both save money and be environmentally conscious, simply by taking things back to basics. Buying in bulk and planning meals to save on food waste can help your budget go that bit further, while refillable products can also help spread the pennies (and save on packaging use).

Finally, the research is clear: buying less meat and incorporating more plant-based meals into your weekly rota may also help to cut your grocery bill. Check out our range of vegan recipes and plant-based protein snacks to give you plenty of inspiration for your next meal plan.

We surveyed over 2,000 UK adults on their grocery shopping habits, including how much they spend, where they shop and what motivates their shopping choices. We also asked questions around how the cost of living has changed (if at all) their grocery spending habits.

Questions were mostly multiple choice with the option to add additional qualitative data where relevant. Results were split by age, gender, region/city and dietary preferences.

5 benefits of yoga you should know about

Discover our ‘Minus the Meat’ Meal Kits

What is Veganuary? | Guide to Veganuary 2021 with Myvegan

What is World Vegan Day & Why Do We Celebrate It?